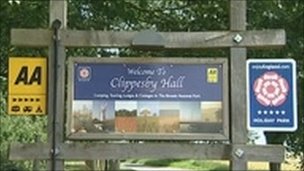 A camper died from carbon monoxide poisoning from a barbecue in an incident which nearly claimed the life of her partner, an inquest has heard.

Hazel Woodhams, 30, of Slaithwaite, near Huddersfield, was in a tent at Clippesby Hall campsite, near Great Yarmouth in July, when she died.

Norfolk coroner William Armstrong recorded a verdict of accidental death at a hearing in Norwich.

The inquest heard the charcoal barbecue they had used to cook on filled their tent with toxic carbon monoxide gas overnight after they had brought it inside.

Mr Wessling woke up at about 06:00 BST disorientated due to carbon monoxide poisoning and called the emergency services.

Mr Armstrong said: “This tragedy should serve as a warning to people who are cooking on barbecues, and they should leave them… in the open air and not take them inside.”

Mr Wessling is still on sick leave after nearly losing an arm due to the poisoning, which also damaged a kidney.

Mr Armstrong said he was going to raise the matter of safety warnings on barbecues with the minister for business innovation and skills to see if anything can be done to make people more aware of the risks of carbon monoxide poisoning.

Miss Woodhams had worked as a scenes of crime officer for police in Leeds.