A family of five were rescued from their tent after being overcome by carbon monoxide fumes from a barbecue. 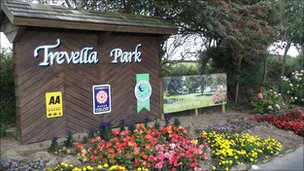 They were taken to hospital after emergency services were called to Trevella Park at Crantock, near Newquay, Cornwall, just after midnight.

The two adults and three children have now been released from hospital.

Firefighters warned of the dangers of having a barbecue inside a tent and said the outcome could have been very different.

Shaun Taylor, the watch manager at Newquay Fire Station, said: “We found that the occupants of the next tent had helped in rescuing the family from the tent.

“We discovered they had a lit barbecue inside the tent. Any item that produces heat or vapours can cause carbon monoxide poisoning. That was our concern.

“If the dad hadn’t woken up and the people in the next tent hadn’t got the people out we would have been looking at a very sad and serious situation this morning.”

Barry Templeton, the general manager at the camping park, said the family arrived back at the site around 07:00 BST.

He said it was the first incident of its kind on the site.

“The well-being of people at Trevella is our concern. I think our first response would be to put a warning notice in the welcome pack highlighting the dangers of carbon monoxide poisoning.”

At the end of July a group of holidaymakers was taken to hospital with suspected carbon monoxide poisoning after an incident at another campsite near Padstow.