A gas extraction method which triggered two earth tremors near Blackpool last year should not cause earthquakes or contaminate water but rules governing it will need tightening, experts say.

The joint report from the Royal Society and Royal Academy of Engineering say the technique is safe if firms follow best practice and rules are enforced.

Exploratory fracking is being mooted in at least seven sites around the UK.

The report was commissioned by the government’s chief scientist, Sir John Beddington, following the decision last year to halt the UK’s most advanced project, in Lancashire, after fracking caused small earth tremors.

“Our main conclusions are that the environmental risks of hydraulic fracturing for shale can can be safely managed provided there is best practice observed and provided it’s enforced through strong regulation,” said the report’s chair, Prof Robert Mair from Cambridge University.

“The UK regulatory system is up to the job for the present very small scale exploration activities, but there would need to be strengthening of the regulators if the government decides to proceed with more shale gas extraction, particularly at the production stage,” he told BBC News.

The report contains 10 top-line recommendations for strengthening regulations, including:

Water is pumped in containing sand particles that prop open the cracks in the shale, allowing the gas out, and a tiny amount of chemicals. 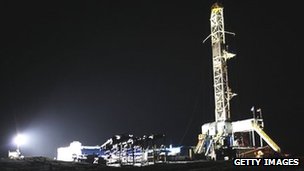 The report recommends more monitoring, but says fracking should be safe if done properly

In the US, concerns have been raised that the gas or the chemicals can enter drinking water supplies.

However, the report concludes that gas contamination should not be a problem – the risk is “very low” – provided that fracking takes place at a depth of many hundreds of metres, a long way below the level of aquifers, and that the wells are properly constructed.

Each well is lined with layers of steel and cement; and if this stays intact, the scientists conclude, gas leakage should not be a problem.

They also say that with good management of waste water, chemical contamination should be avoided; they criticise the US practice of leaving it in open ponds, which would not be permitted in the UK.

The report says the risk that fracking will generate significant seismic events is also small.

The actual explosions are far too small to be noticed at the surface, said Prof Zoe Shipton from the University of Strathclyde.

“If the fluid moves into existing faults in the rock that are close to slipping anyway, you’ll bring that slippage forward in time,” she said.

“But the Magnitude 2.3 event in Blackpool last year – that is like a lorry going past your house – in fact the British Geological Survey can’t measure below Magnitude 2 in towns because of the traffic.”

The European industry is in its infancy compared with the US, and governments’ views on the technology are mixed.

Fracking has been banned in France, but countries such as Poland are taking a strong interest.

Prof Mair said climate impacts were outside his remit, but a detailed look at the issue should happen at some stage.

“The Royal Society and Royal Academy of Engineering believe this is an issue that needs to be addressed,” he said.

“It’s a very wide issue – energy policy, CO2 reduction, all of that needs to be looked at – and gas in general is part of that.”