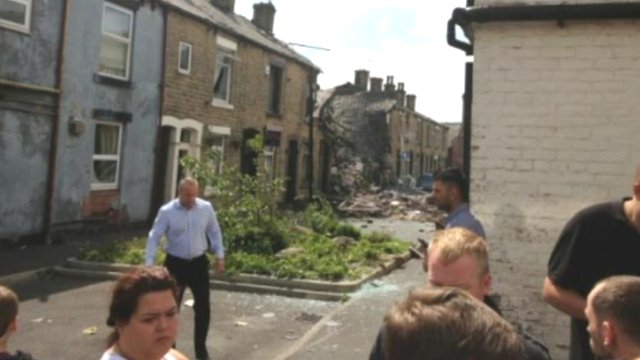 A child has died in an explosion which “completely flattened” a house in the Shaw area of Oldham.

Another person is believed to be trapped after five terraced houses were damaged in the suspected gas blast, Greater Manchester Police said.

Firefighters are searching the damaged properties in Buckley Street. One man was taken to hospital with 80% burns.

A fire service helicopter with listening equipment is at the scene trying to detect if people are trapped in the rubble.

More than 30 firefighters are at the scene.

Specialist search and rescue teams, including a dog, are involved in the operation and extra teams have been drafted in from neighbouring Lancashire Fire Service. 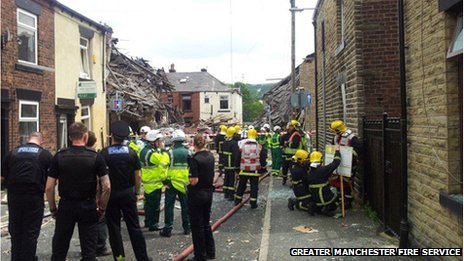 Five terraced homes were damaged in the blast shortly after 11:15 BST

Alex Perkins, who lives across the road, said: “It’s like a war zone – tiles that have blown off literally across the streets, there’s just debris everywhere. It’s mad.

“It’s just empty, there’s nothing there, just bricks on the floor, just rubble.”

Georgian Ulla, who also lives on the street, said her house “shook like it was an earthquake”.

“All the lights shook – I thought someone was breaking in to begin with,” she said.

“First thing that I saw was all the toys on the floor. Apparently there are kids that live in the house.”

Shaw ward councillor Mark Alcock, who lives a quarter of a mile away, described the scene as “utter carnage”.

“An end-terrace house has been completely flattened and properties up to 800m away have had their windows blown in,” he said. 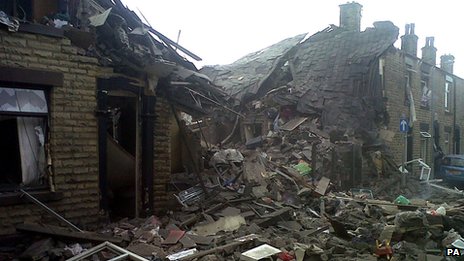 Several houses were damaged in the explosion

“It’s a real mess… we understand there are people trapped in other properties,” he added.

Peter Travis, who works nearby, said: “I heard the loudest bang you could ever hear, then I could see bits of slate going through the air like ticker tape.

“Bits of slate were landing near us about 250 metres away.

“I could then hear alarms going off and then a silence, it was absolutely frightening.”

Craig Needham who runs a nearby garage, said staff ran outside when they heard the explosion.

“We could just see a black plume, we thought a bomb had dropped,” he said.

Oldham Council said a rest centre had been set up at Crompton House School in Rochdale Road for people who had been evacuated from their homes.