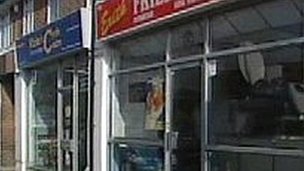 A 36-year-old man has received a suspended jail sentence after a teenage girl died of carbon monoxide poisoning in his fried chicken restaurant.

Chelsea Wright, 16, was killed by the fumes in a store room in the restaurant in Bexleyheath, south London, in 2009.

Shop owner Amman Cheema, of Gravesend, Kent, admitted a health and safety charge of failing to maintain a heater.

Charges of manslaughter and causing grievous bodily harm were dropped at an earlier hearing.

In March 2009, Chelsea and her friend Tom Hoyne, who was then 17 and worked part-time for Cheema, were allowed to stay in the store room after the restaurant closed.

This is truly a tragic case”

Tom lit a gas heater which had been on earlier but the cylinder heater was 30 years old and faulty.

It had not been serviced and a sensor which should have shut it off was not working.

Tom, who suffered permanent hearing loss, was found unconscious in the morning by Cheema.

Judge Peter Rook said the shop had been sold at a loss and Cheema had not known the heater was faulty.

He said: “This is truly a tragic case.

“This could so easily have been avoided if the appliance had been properly serviced.”

Cheema, of Earl Road, received a six-month prison sentence, suspended for two years. He was also ordered to pay £15,000 in costs.